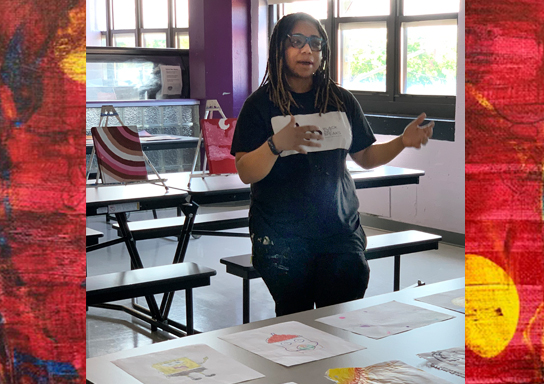 Meet Ms. Alena Cody, art instructor for the recently added Art Program at Dohn’s Young Women’s Academy. Ms. Cody has a background in Elementary Education and Early Childhood Development, but her hobbies expose her true passion as an artist and muralist. She knew she wanted to pursue art during her high school years, when art class was the highlight of her day. Field trips to art museums opened her eyes to what was available to her in the outside world. Today, teaching art is a way to pay forward the gifts she herself received in high school: joy, hope, confidence and purpose.

A few “Get To Know You” questions for Alena Cody:

Ms. Cody: I was intrigued by the idea of working in an all-girls program. I did not grow up with a lot of females in my family, and my own high-school ex 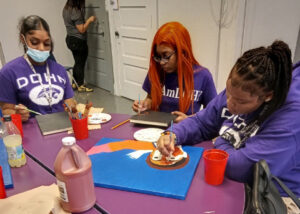 perience with young women was not necessarily a positive one. I didn’t always fit in. The new Art Program at Dohn presented a unique opportunity to jump back into that kind of environment using art as a catalyst for growth and change.

Did you have any reservations?

Ms. Cody: Yes – I also had reservations about it being an all-girl program! From the beginning I noticed that some of the same themes here were what I experienced in my own high school years. There was a lot of attitude amongst the girls. I allowed them to be candid with me and some of the students opened up, saying they really didn’t get along with the other girls at school.

Did anything surprise you?

Ms. Cody: I was truly surprised at how disengaged a lot of the girls were at the beginning. They didn’t want to participate and didn’t see the value in art or in being a part of the classroom. Students tried to defy me with their standoffish behavior and they wanted me to buy into that behavior. I had to show them that I was the adult, the teacher, and get them to buy into what I was trying to teach them. Thankfully, the power of art won them over.

I was also pleasantly surprised at the incredible innate talent some of the girls had, before I even began teaching them. That was pretty amazing.

How did you choose what projects to work on?

Ms. Cody: We had to follow the Ohio State Learning Standards for beginning HS art students. I made sure to stay in line with those while also allowing the girls to choose what they were interested in and explore at their own pace. I had to “lead the horse to the water to drink”, but after that it was important to me that they maintain a certain level of independence in deciding what to do. In the end, the girls decided they wanted to learn how to sketch better and how to mix colors for their paintings. We also had a group project, where students were able to join in or work independently as they wished.

Tell us more about the group projects – how was the subject chosen?

Ms. Cody: The girls were asked to choose a famous African American woman, research her accomplishments and decide how this woman contributed to society.

I wanted the girls to see that even though they may be young and inexperienced, there are plenty of African American women just like them who have blazed a trail from small beginnings.

The artwork was composed of four panels, and all of the students helped to paint each panel. That is the beauty in it. This is a collaborative piece and every student pitched in at their own pace in different ways at all times. Much like collaborative groups in the real world, I gave them the free will to engage in their pieces when they felt up to the challenge and the liberty to step away at times and allow others to fill in and continue the process.

How did the girls work together on the group project? 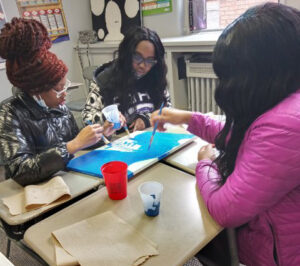 Ms. Cody: The girls worked wonderfully with each other! They communicated with poise and grace while collaborating on the project. I also allowed their conversations to bloom and blossom in other ways. We talked about home life/family dynamics, failures, accomplishments, hopes, dreams, fears/anxieties, significant others, loss, anger, sadness, self care, spiritual beliefs, and any and everything in between. I mediated and steered the conversations as much as possible as any responsible adult would, however, the conversations needed to be candid and real.

With the assignment, the girls helped each other along the way, passing on the skills and knowledge they picked up from me during lessons, such as how to properly hold a brush, which strokes/techniques to use, how much pressure to apply to the brush, and how to take care of the materials. They learned quickly and began working more independently and responsibly. My goal was to have them complete the assignment, showing them what they are capable of and have them realize their own potential. I believe we achieved that goal!

What obstacles needed to be overcome?

Ms. Cody: Many of the students wanted to be immediately good at art, rather than going through every step, start to finish. There is a process to everything in life, and especially in art, there is a distinct process to get the result that you want. Instead of doing several drafts of sketches or researching techniques on how to do things, students just wanted to jump right in and get instant gratification. They became frustrated that things weren’t perfect right away, which affected their confidence level.

At the beginning of the course, the students started a project, put on one layer of paint, and thought it was complete. I had to shake my head and explain that some works of art need 2, 3, even 6 or 7 layers of paint to be considered finished. It is a process, and it requires patience and a willingness to see potential. In time, the students grew to appreciate the process instead of feeling like it was a daunting project.

Ms. Cody: One day I came to class after about 8 hours of painting a community mural (on a ceiling!). I was exhausted and told the girls, “we don’t 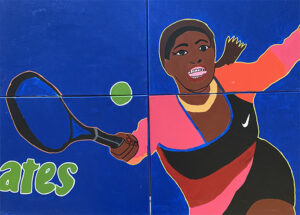 have to paint if you don’t want to”. The students were disappointed and said “we really want to paint!”. I was blown away because it was such a stark difference from the beginning of the art program.

It was important to me that the art room become a safe space. Oftentimes we would chat as we were working on our art, and some of the more shy girls started to open up and blossom. I could see the girls letting their guards down, getting to know each other outside of their “cliques”. They began to interact with each other organically, rather than being forced to get along. They became more willing to ask each other for things, even something as small as a pencil, or help with a technique, which translates over to everyday life. Students who had no confidence before began showing and teaching other students what they had learned.

We built a community in a classroom that was not there before.

What would you like to see happen with this art program moving forward?

Ms. Cody: I would love to see art class become a requirement, rather than an elective, or perhaps be integrated on two levels: first as a basic requirement, and then as an elective to continue on with further instruction.

I would love to have more time with the students. With more time we could start working on a larger project, like an actual mural. Something they work on together for the benefit of the community. With more time they could go on field trips to see different exhibits and different kinds of art.

I’d like to see Dohn continue to offer this art program, not only for the YWA, but for other programs as well. Extending the hours to an after-school elective option. I don’t know where I’d be today without my school allowing the possibility to continue working on my art outside of school hours. That opportunity changed my life.

Our goal is to raise $75,000 by August 15, 2022 to continue offering art at the YWA, and offer this impactful Art Program to more Dohn students.

You Can Help – Please Make a Difference! Give Today!