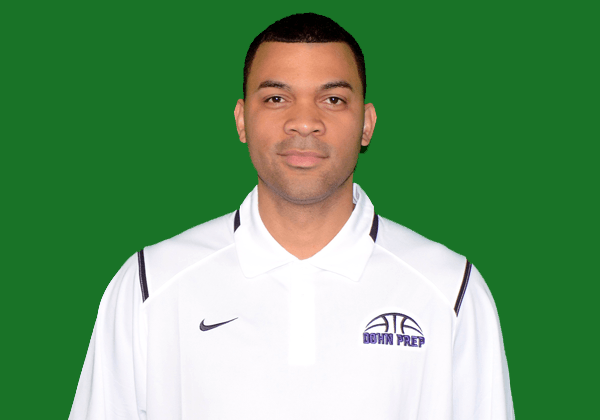 Energy radiates through Samuel Villegas like light through a prism.  His is a kinetic energy, reflecting an animated life.  Watching him courtside, one sees grace in motion and laser focus on cohesive, smart play.

Born in Carolina, Puerto Rico, Coach V grew up playing sports. At age 12, he was throwing a baseball 77 miles per hour. His naturally high energy had him going from baseball to basketball practices, games, and tournaments. He was, in his words, “Driving my family nuts.”

Coming from modest roots, the expenses of playing two sports as intensively as Samuel played them presented a challenge to the Villegas family. There were playing fees, the cost of uniforms and transportation expenses.

“My parents sat me down when I was 12 ½ years old and said, “We will always support you. However, you have to choose between baseball and basketball, because of the financial costs.”

The weight of that choice was heavy for a 12-year-old, however, in Coach V’s innate wisdom; he knew that fast-moving basketball was the better fit for his high level of energy than the slower-paced game of baseball.

As a tenth grader, his strong playing ability lead to multiple recruitment offers. In his junior and senior years of high school, Coach V relocated, by himself and with his parent’s blessing, to Homestead, Florida.  Here, he played basketball for Berkshire School alongside other Division 1 level players from around the world.

While his basketball game was superior, his capacity for English as a second language needed help. At that young age, Coach V owned his potential and dared to do what he needed to do, become proficient in English.

Coach V transferred from Florida to Lima, Ohio, where he could get the structure and support he needed to become fluent in English. While his English improved, it was a challenge to pass the English portions of the ACT and SAT. He had to repeat those tests before passing.

A Professional Player with International Experience

Graduating from the University of Toledo in 2006, Coach V has played professional basketball with teams in Mexico, the Dominican Republic, Argentina, Chile, Germany, Uruguay, and Ecuador. In a Las Vegas, NBA tryout camp, Coach V played with the San Antonio Spurs.

Three years ago, Coach V knocked knees with another player. The impact broke the patella tendon in his left knee and he was out of the game for 11 months. When he returned to the game, he played for four months and knew that his playing capacity was not the same.  That knee bump represented the end of his playing career.

Toward the end of his playing career, Coach V had the opportunity to be both a player and a coach for the Vaqueros de Bayamon team in 2015. He also had experience coaching youth in Puerto Rico. These experiences revealed a talent for coaching. As spectators, we see his skill in coaching; his Dohn Prep team plays as a team, and their winning scores reflect this cohesion.

Samuel Villegas is in Cincinnati thanks to a former player friend, Bryan Wyant.  While on holiday in Puerto Rico, the Wyant family visited with Coach V’s family.  Coach Wyant knew that Coach V was at the end of his professional playing career due to the knee injury and helped him network into a high school coaching position.  Through the collaborative network of Cincinnati high school sports, Coach V has found his way to Dohn.

Coach V recognizes that intelligence rules the game of basketball. He communicates to his players that they have to know the plays to execute them. Learning strategic plays reinforces their Dohn Prep studies, as they prepare to take the ACT and SATs. Our student-athletes have the potential for significant college basketball careers ahead of them, and Coach V keeps that potential in focus.

Coach V’s presence on our Dohn court speaks for itself: he is a man of stature, ease and grace, and above all, wisdom.  He leads our Dohn Prep team to victory with a leadership that comes from having played basketball with grown men his entire career, even as a young teenager. He knows the game and can coach young players to success.

At Home, in Cincinnati

His wife, Bianca, and their two high-spirited children, his daughter Naib, two years old and his one-year-old son, Nabian enjoy his success, and Cincinnati, with him. His family of origin lost belongings in the hurricane that devastated Puerto Rico. All family members are safe. His parents are visiting Coach V and his family in Cincinnati over the Thanksgiving, 2017 holiday and his sister and her family are relocating here,

We are grateful to have Coach V’s high energy, his international playing experience, his love of the game and his expert coaching move Dohn Athletics forward. With no NBA franchise, college play drives the enthusiasm for live basketball in Cincinnati. With Coach V’s leadership, Dohn Prep basketball adds to that enthusiasm, with must-see games. You can find the schedule for our Dohn Prep and boys and girls varsity basketball teams here.