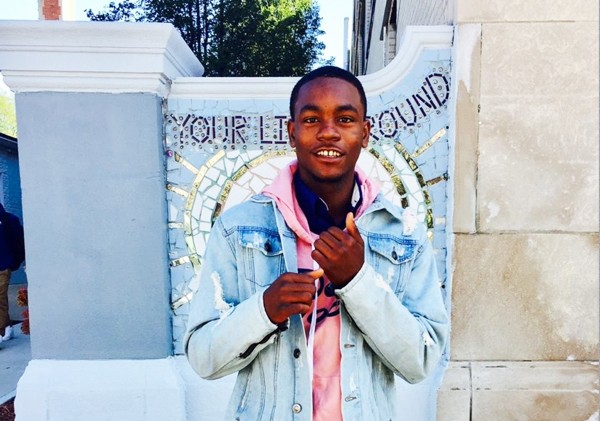 Dohn’s Punching 4 Peace took center stage in the heart of our city, Fountain Square, Saturday evening, September 30, 2017.  This was also a day when Cincinnati suffered another death by gun violence.

One of Dohn’s students, La’Carlos Maurice Sally, Jr., was a participant at the event. Sally celebrated a win with a TKO in the first round.”If it weren’t for boxing, I would be in serious trouble,” he says.

Sally shares a poignant story of how he first got into boxing. “A friend and I were hanging out one day, and he says to me, ‘Let’s go to the ring.” Sally did go to the ring and “has never left.” The friend, however, has not been able to return, a victim of lethal gun violence. Sally remembers that boxing was his friend’s favorite thing to do, and it is his favorite activity, too.

Boxing keeps Sally focused and is an alternative to hanging out on the streets, or being involved with drugs and crime. Boxing is also a mediation strategy for him and his Mom. “When I argue with my Mama, I go to the ring and work it out. I can talk to the coaches about our arguements, too.” He receives patient, caring perspective from Boxing Director Andrew Williams.

“A friend and I were hanging out one day, and he says to me, ‘Let’s go to the ring.” Sally did go to the ring and “has never left.”

“I have seen Mr. Williams make a change in other people’s lives,” and in addition to his love of the sport, having access to the seasoned wisdom of Williams is another reason why La’Carlos Maurice Sally, Jr. settles on boxing as a life choice.

While boxing might seem a lowbrow sport for some, one cannot get much higher than royalty to realize that boxing is a highbrow sport.

Prince Harry, of the Royal Family in England credits boxing with resolving the deep grief he experienced related to the traumatic loss of his mother. He says, “During those years I took up boxing because everyone was saying boxing is good for you and it’s a really good way of letting out aggression. And that really saved me because I was on the verge of punching someone; so being able to punch someone who had pads was certainly easier.”

As Boxing Director Andrew Williams says, the ring is controlled.  There is a referee in place, and it is a competition as any sport is a competition. At the end of the bout, boxers shake hands.

Aggression is real; it can turn to rage which can lead to impulsive, irreversible violence. As our greatest boxer, Muhammad Ali proved, boxing provides grace to life inside and outside the ring.